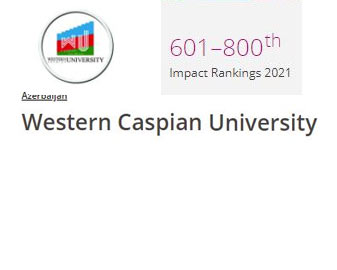 Times Higher Education (THE), one of the most influential rating agencies in the world, has announced the ‘THE Impact Ranking’ for 2021.

The high position of WCU is the result of consistent efforts in recent years to improve the quality of education, to adapt to new challenges, and providing an experience and trends like the world’s leading universities.

However, we would like to note that Western Caspian University joined ‘THE Impact Ranking’ not to fall into the rankings, but to adapt to the development trends of the best practices of the world’s best universities, and to respond adequately to global educational challenges.

WCU has achieved the best results, especially in five areas, and has become one of the best 201-300 universities in the world in these areas.

These goals include the development of an environment of social equality, participation in education and research to achieve food security and better nutrition, promotion of sustainable agriculture, affordable and clean energy, protection of marine ecosystems and strengthening research activities in this area, proper organisation of biodiversity education & its social significance, the improvement of the environment for the elimination of inequality in education and extracurricular activities, and the impact of these factors on quality education.

At the same time, WCU is among the top 301-400 universities in terms of promoting equal distribution of water, the transition to sustainable consumption and production models, the fight against climate change and the creation of an environment for research in these areas.

WCU ranks 401-600 in terms of gender equality, inclusive and sustainable economic growth, employment for all and the promotion of a decent work environment.

At the same time, according to the quality of education, the activity of the university was rated higher than average.

Congratulations to our teachers and students on this success. We continue to work together to develop Azerbaijani education and one of the leading models among the world’s education systems.

The full rating can be found at: